Formerly published as two separate volumes: American Sea Songs and Chanteys from the days of Iron Men and Wooden Ships, and A Sailor's Treasury.

Shay heard his first shanty in 1915 while serving as a foremast hand aboard the tanker Standard. The ship took fire off the Yucatan peninsula and all work had to be done by hand. The crew struggled to handle the heavy towropes of a rescuing ship. "Work was going poorly until a shipmate sounded off with 'Whiskey for my Johnny.' The song brought immediate results and others were broken out, mostly in fragments. By the time the Standard made port I had a small collection of the old chanteys: subsequent voyages increased my repertory." 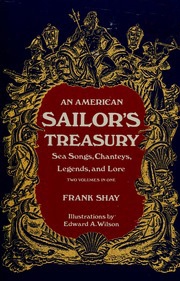